For this project, groups were assigned the task of creating an interactive art piece, where users give at least three inputs into a machine. As the user gives inputs, the machine manipulates itself in unique ways. The machine is supposed to show the passage of time creatively, with each machine required to cease main functionality after 45 seconds. In Eden, the user witnesses a story through three flipbooks stacked on top of each other. Passage of time is shown in the form of the growth of an apple tree, starting from a seed. It should take, cumulatively, 45 seconds for all three flipbooks to rotate.

The machine begins by welcoming the user with a prompt to plant a seed. It does so by illuminating LEDs (light emitting diodes) around a small hole located in the center of the base. Once a marble, which is serving as a seed, is dropped inside it
presses on a mechanical switch.​
​

This switch triggers the bottommost flipbook and signals to turn off the LEDs along the hole. LEDs along the top rim of the first flipbook turn on. A motor attached to the left of the spindle of the bottom flipbook begins to rotate and causes pages to turn. Images within the flipbook give the illusion of a seed growing into a tree trunk.
A protrusion exists along the rightmost circular end of each flipbook’s spindle, as seen in the picture below. Before the start of each flipbook’s rotation, the protrusion presses down on a switch located just beneath the spindle (image found below). When rotation begins, the protrusion departs from the switch and releases it. After some time, the protrusion has made a complete rotation, and once again is next to the switch. The switch, once again pressed, registers as an event in our program. The pressed switch always serves as a signal to segue from one set of actions to another. In the case of the bottom flipbook, the pressed switch signals the microcontroller to end rotation and to begin the watering can service. 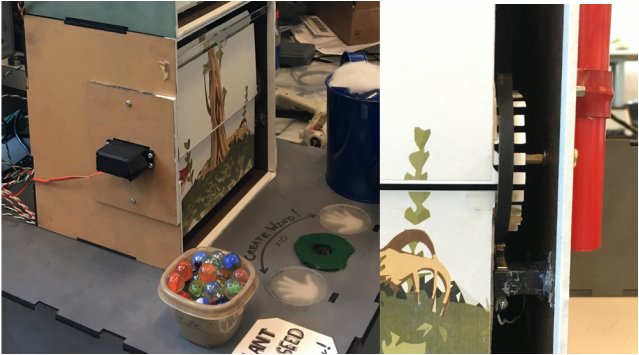 Note that the seed can be reclaimed from a small latch on the lower left hand corner of the machine. 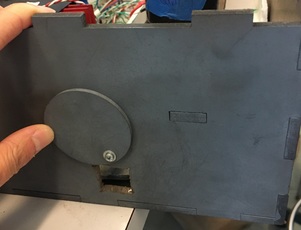 After the bottom flipbook’s switch is pressed a watering can, that is placed to the right of the machine, gets illuminated by blue LEDs. This prompts the user to mimic a pouring motion over the bottom of the tree. As the user “waters” his tree, he experiences haptic feedback as a vibration sensation is felt. The speed of the second flipbook’s rotation at any given time will be dependent on the degree to which the watering can is tilt at said time. For example, if at any point the watering can is leveled, the result is no flipbook motion. As a counterexample, tilting the can ninety degrees results in maximum rotational speed of the second flipbook. As watering progresses, LEDs around the top rim of the second flipbook slowly rise from an off state to a maximum brightness. The vibration along the handle is due to a vibration motor circuit located within the watering can. An accelerometer is also inside the watering can and is used to read the degree of tilt by the user as an analog electrical signal.

The second flipbook shows butterflies flying around the middle trunk of the tree. After the second flipbook makes one complete rotation, its spindle hits a switch in a manner akin to the switch mechanism described for the first flipbook. The blue LEDs in the watering can, which were fully on since the first flipbook stopped rotating, turn off along with the vibration motor. However, the second flipbook will keep rotating at a constant speed until the end of the user’s interaction with Eden. Pressing of the second switch also signals the motor on the topmost flipbook to move briefly. The third flipbook shows in its moving pages the top of the tree germinating. After a very short time, long before a complete rotation can be achieved, the third flipbook stops moving. Only after the third flipbook’s brief motion is the user prompted for the last input. The motion of each flipbook has shown a tree reaching its full growth. All that is left is to show the fruit sprouting and falling.
For the final user input, the player needs to create a gust of wind for the fruit on the tree to fall. Two circular icons with hands in their centers reside on either side of the center hole where the user planted the seed. 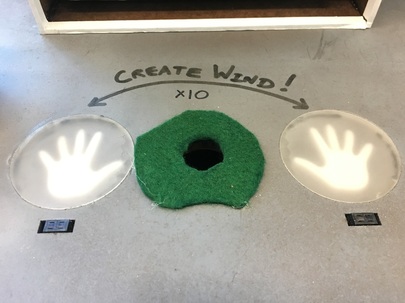 The leftmost icon illuminates with a blue LED that prompts the user to place his hand over it. Immediately after the user does so, a blue LED illuminates the rightmost icon, and the LED on the leftmost icon turns off. This prompt the user to move his hand over. As the user moves his hand, the icons will alternate left and right between which blue LED is on, signaling to the user to keep hovering his hand back and forth. Sensing of the hand is made possible by non-contact infrared LED sensors mounted next to the left and right icons. After the user sways his hand back and forth ten times, the motor on the third flipbook will activate once again.
As the flipbook runs, an LED strip along the top of the third flipbook will slowly rise from an off state. The LED will achieve maximum brightness at the end of the flipbook’s cycle. The third flipbook depicts leaves sprouting along the top of the tree, followed by an apple growing, and then falling.
At the end of the third flipbook’s story, its spindle hits a switch. This signals a fourth motor to rotate and activate the fruit dispenser. As seen in the picture below, the fruit dispenser is a wheel with fruit shaped erasers placed inside it. This wheel, which is attached to the motor, will rotate so long as the motor is in motion. As the wheel moves, the fruit erasers get pushed from the dispenser into a hole. This hole leads down a long red pipe that extends to the bottom of the machine. The fruit appears at the bottom inside a small glass. The wheel and dispenser are built such that after one sixth of a rotation, a switch is pressed. When this switch is pressed, it signals to cease rotation of the dispenser. The dispenser is designed such that only one piece of fruit falls between the start of the motor’s rotation and the pressing of the switch on the dispenser. The machine’s fruit dispenser can be replenished with new erasers. 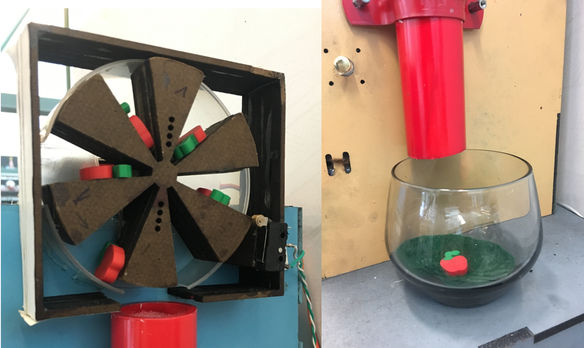 As well as activating the fruit dispenser, when the switch on the third flipbook is activated a celebration is triggered. ​In this celebration, the user’s efforts concludes with all three flipbooks turning at a high speed and with all the LEDs in the machine blinking on and off. The machine then resets to the beginning state, where it readies for a new seed planted by a new user. Other aspects to note of Eden are that, at any moment within the interaction, if the user is inactive for two minutes, the machine times out and resets to the beginning state.
This is a full video of how a user would interact with our ART machine.

Most of our components were free of cost thanks to scrap materials in SPDL/cabinet of freedom, the PRL, and Room 36. Our biggest source of expenditure came from the servo motors used in the flipbooks. The total cost came out to be $139.64. Below is a high-level breakdown of cost by each of the modules: 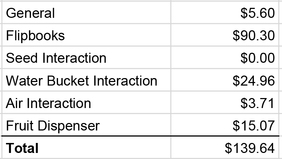 Below is the more detailed cost breakdown for each module: